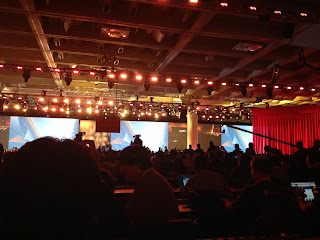 This is only the tip of the iceberg. Visit the OpenWorld site to watch all the keynotes.
Posted by Ronald van Luttikhuizen at 7:41 PM No comments:

It's that time of the year when we are immersed in the JavaOne and Oracle OpenWorld conference in San Francisco. A conference that always leaves a bit of a shock-and-awe effect due to its enormity. In these blogs you can read about our adventures at OpenWorld and the news so far.

Let's talk numbers first. This year there are even more attendees than last years, approximately sixty thousand (of which 0,0033% work for Vennster). There are 2.555 sessions (of which 0,078% are presented by Vennster, the numbers are getting better :-). The attendees come from 145 countries and various continents: 69% from North America, 21% from EMEA, 6% from Japan and Asia Pacific, and 4% from South America. 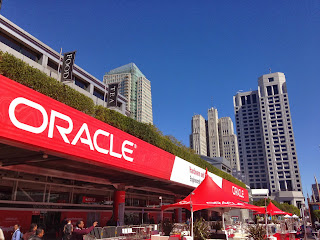 Friends and family members sometimes think that OpenWorld means sitting in a park with a cocktail while watching the America's Cup and touring the Golden Gate Bridge. In reality our stay at OpenWorld is jam-packed with lots of events besides attending presentations, going to the demogrounds and discuss the latest products and features, and going to the hands-on-labs to keep up to date with all of the latest developments: 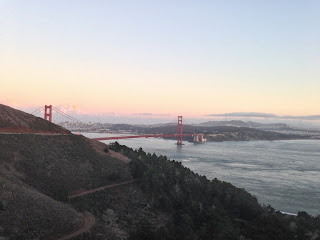 The upcoming blog will talk about some of the exciting news here at OpenWorld and JavaOne.
Posted by Ronald van Luttikhuizen at 8:43 PM No comments:

I have been using BPMN in projects for a while now. It is very useful in describing the predefined sequence of actions that need to be taken in a specific process.

With BPMN 2.0 we have the option to support the process with IT using a Business Management Process System (BPMS) without having to rewrite the process definition. Oracle BPM Suite is an example of such a BPMS. You take the BPMN 2.0 process definition and implement the activities and events using the Oracle SOA Suite. This is a very powerful concept and works well in certain situations. However, not every process actually follows a limited, predetermined sequence of events. A lot of process management or workflow projects fail because the BPM approach is too restrictive or because the system does not support all the possible scenario's that apply in reality.

So how do we model processes or actions that don't follow a predefined sequence? BPMN offers ad-hoc sub processes. These can be used to depict a number of activities that can be executed in any order any number of times until a certain condition is met. The notation for this is depicted below.
However, none of the BPMS systems I use (Oracle BPM Studio, Activiti) support this construct. You can see this in the screen shot from Oracle BPM below. Sub processes are supported, Event Sub Processes are supported, the creation of ad-hoc tasks by a user or the system at runtime is supported, but Ad-hoc sub processes as defined in BPMN 2.0 are not.

There are workarounds for that obviously. You can model a process that offers a choice (gateway) every time a new step is taken and loops around until a certain condition is met. This results in very complex process models that are hard to read and understand and therefore 'breaks' the idea of having a BPMN 2.0 process that is used both by the business as documentation and by IT for implementing it directly in your BPMS. Besides, it does not take into account the fact that you want to be able to add new activities on the fly, during the execution of your process.

The OMG defined a new specification: the case management model and notation or CMMN that can be used to model non-deterministic processes. It is currently in beta. A case is defined as: "(...) a proceeding that involves actions taken regarding a subject in a particular situation to achieve a desired outcome." A case has actions, just like a process. The difference is that you don't have to know in advance what the sequence of these actions is, it can be completely ad-hoc. But as the specification continues: "(...) As experience grows in resolving similar cases over time, a set of common practices and responses can be defined for managing cases in more rigorous and repeatable manner." Hence the term Case Management.

The specification describes the following:


Below is an example model of the case "Write Document". 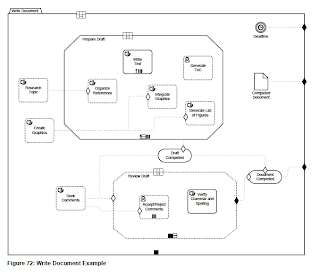 Now let's compare this model to BPMN.
Looking at the specification, all the relevant information is defined in the semantic part of the specification, including the execution semantics. The model is not as rich (yet?) and seems to be lacking crucial information. I guess the only way to found out how bad that is, is to start using it...

In part 2 I will model a case (applying for a permit) using different notations. Part 3 will show how case management is supported in Oracle BPM Suite using the case component.


Posted by Lonneke Dikmans at 6:48 AM No comments:

It's becoming a tradition, the Oracle OpenWorld preview event hosted by AMIS. An event for those that cannot attend OpenWorld but are interested in the sessions presented by Dutch and Belgium speakers there. Or for those that want to hear the presentations twice of course ;-)

Like previous years, Vennster was present at the preview event with a couple of presentations. For those who visit OpenWorld, I've included the location and time:


The Live Development session is a unique session in which the presenters build and/or demo an application from scratch (depending on the available time and beamers :-) using Oracle Fusion Middleware products such as Oracle SOA Suite, BPM Suite, ADF, and JDeveloper.

The session description says it all:

The slides for this session are available on Slideshare:


Next was Lonneke with her presentation on mobile and web patterns in ADF. Attend this presentation if you want to know why and how to engage your end-users in the design and development of (enterprise) applications. Learn how the available patterns from the Applications UX program help you build better and more useable applications.


"For those who are building Oracle software for browsers or mobile phones, Oracle provides a rich set of Oracle Application Development Framework (Oracle ADF) design patterns that provide guidance on industry standards for creating rich, usable applications. Come to this session to hear two leading Oracle experts discuss how to make use of these patterns to ensure that you build applications that not only are useful for your users but also make them productive and satisfied."

Hope to see you at OpenWorld !

Posted by Ronald van Luttikhuizen at 11:32 PM No comments: