As I mentioned in a previous blog, Oracle Fusion Apps breaks with Oracle's past in the sense that the user interaction is built from a user perspective. Rather than exposing a datamodel or a business process to the user, they have designed the user interface based on information they have gathered about their user. Their website tells this compelling story, go check it out (after finishing this blog ;).

These days you can't just design for the desktop anymore. People use other devices like tablets and mobile phones and these devices are showing up in the workplace more and more. On top of that, people are working from different locations: from the office, from home, en route, or wherever they happen to be. This creates a new challenge when creating services or application. Take for example a HR self service application or an expense report application. Employees expect this functionality to be available everywhere, and on all devices.
At the other hand, organizations are struggling with the application of 'apps'. When I started programming, every piece of software had to have an API. Then the world realized that you want to integrate systems in heterogeneous landscapes and every piece of software needed to have a 'service interface'. Now that we have apps, every piece of software I realize needs to have a REST API so that people can create an app for that. The problem with this approach is that creating a service interface on every piece of software does not create a good service oriented architecture and creating a mobile interface for every piece of software does not create a good mobile user experience for your customers, employees and partners. So how should you approach this?

The ADF User Experience patterns and guidelines site is a very good starting point for organizations that want to start using mobile for their applications. The site has four sections:

Ultan Ó Broin and me will present some mobile design patterns that are defined in the process of designing mobile applications for Fusion apps at OBUG connect 2013, this afternoon. We will explain the importance of patterns and show some of the patterns that can be built with either ADF Mobile, or the native platform of a device.

The next step is that projects start using these techniques to built user interaction for professional users, like we have been doing for consumer software for a long time. It is time that professionals get the user experience they deserve and need to be productive and happy while doing their job!

Posted by Lonneke Dikmans at 3:14 PM No comments: 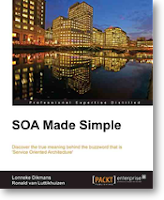 SOA Made Simple is a concise and indispensable handbook for finally understanding exactly what Service Oriented Architecture is. Split into three clear sections, in this book you’ll learn from both theory as well as step-by-step implementation examples to aid in your understanding of this often poorly- articulated industry term.

A short abstract for SOA Made Simple:


SOA is an industry term which is often preached like a religion rather than taught like a technology, and over time, grasping the concept has become unnecessarily difficult. Many companies proclaim that they don’t know where to begin with SOA, while others have begun their SOA effort but haven’t reaped the benefits they were convinced it would bring. “SOA Made Simple” explains what SOA is in simple terminology and by using real-life examples. Service-orientation is already a very natural way of thinking for business stakeholders that want to realize and sell services to potential clients, and this book helps you to realize that concept both in theory and practice. After reading “SOA Made Simple” you will have a clear understanding ofwhat SOA is so you can implement and govern SOA in your own organization. If you are an architect who wants to be completely clear in your understanding of what SOA is, then this book is essential. In fact, anyone (designer, developer, administrator or team lead) who is implementing or about to implement an architecture in an IT environment should not miss out on “SOA Made Simple”.

Posted by Ronald van Luttikhuizen at 8:52 AM No comments:

From the Trenches 3 | Patching OSB and SOA Suite to PS5


In two previous blogs (part I and part II) I talked about a recent upgrade from Oracle Fusion Middleware 11g PS2 to 11g PS5. This blog finishes with a post-installation step that was required to complete the upgrade and a quick note.

All in all, after a good preparation the team was able to patch a production environment to PS5 in almost an afternoon. The environment runs several Fusion Middleware products (OSB, SOA Suite, OID, WebLogic Servers for JEE apps) and spans multiple WebLogic Domains and multiple WebLogic Managed Servers in single-node clusters.

Migrating running composite instances that use While activities

One of the new features in SOA Suite 11g PS3 is that the Enterprise Manager Fusion Middleware Console shows the loop count in the BPEL Audit Trail when using While activities. This is shown in the following figure.

Variant not found.
The variable "__loopCondition" is not declared in the current scope. All variables must be declared in the scope before being accessed. This was an internal error. The flow was not generated correctly by the BPEL compiler.

The audit trail will show the following message:

It seems SOA Suite uses an internal variable to count the number of times a loop is executed. Probably, this variable is not initialized when using a SOA Suite 11g version predating PS3 and thus results in the error.

There are two solutions to this:


After applying the patch and restarting SOA Suite you will notice the following log entry indicating the loop count exception is handled by SOA Suite:

<Warning> <oracle.soa.bpel.engine> <BEA-000000> <Handling Exception on setting __loopCondition. This is expected for in-flight instances created before SOA upgrade from PS3 or older versions.

The out-of-the-box Human Worklist Application is configured to use the oracle/no_authentication_service_policy policy of Oracle Web Services Manager (OWSM). This policy became available in later patchsets, but isn't shipped with SOA Suite and OWSM PS2. Without updating your OWSM policy store you'll see the following error when logging into the Human Worklist Application after applying PS5:

This can be fixed by updating the OWSM policies using the upgradeWSMPolicyRepository() command. This is documented in Upgrading the Oracle WSM Policies in the Repository. Make sure the Managed (or Admin) Server on which the OWSM PM application is deployed is running. Otherwise you'll see an error indicating that an MBean that is used for the policy upgrade cannot be reached.

See the Oracle Fusion Middleware Security and Administrator’s Guide for Web Services 11g Release 1 (11.1.1.6) for more information on OWSM and its policies.