In recent years I've been involved in different Oracle B2B implementations and troubleshooting projects based on ebMS and AS2 protocols. Not so long ago, I came across a project that needed to support multiple versions of an ebMS service. Versioning is quite trivial for SOAP and RESTful Web Services using e.g. different namespaces, version indicators in endpoint locations, and so on. However, it is a bit different for ebMS-based services implemented in a B2B gateway.

ebMS is one of the protocols supported by the Dutch government standard DigiKoppeling for exchanging information between governments such as municipalities, provinces, and departments. In this particular case, the existing integration flow that needed to support a new version of an ebMS service is as follows:

OLO (Omgevingsloket Online) is a government solution where companies and citizens can apply for permits. OLO routes those permit requests, using the ebMS protocol, to the applicable government agency based on the type of permit. In this case Oracle B2B is used by one of these government agencies to process these permit requests. B2B transforms and routes the inbound messages to Oracle Service Bus using JMS, while OSB forwards the requests to a backend application by invoking a SOAP Web Service. Vice versa, outbound messages are transformed by B2B to ebMS and send to OLO. You can read more about this case in a presentation I gave at OUGN. 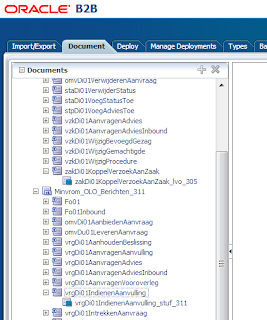 Next we add the 3.11 document types to the two existing trading partners: OLO and the government agency that processes the permit requests. We also specify if the document can be send or received by that particular trading partner.

To complete the B2B configuration we define the agreements. Here we can make sure that service versioning is supported:

Inbound messages from OLO to B2B to OSB

Outbound messages from OSB to B2B to OLO
OSB can integrate with B2B by setting specific JMS headers that B2B uses to correlate JMS messages to specific agreements. One of these headers is the DOCTYPE_REVISION attribute. In the new OSB service, we can simply set the header value to the Document Protocol Version that was configured for the 3.11 messages. Now B2B receives both 3.05 and 3.11 messages but is able to differentiate between them using the header properties.

However, if ebMS is a constraint in your project than Oracle B2B offers a good out-of-the-box solution that helps you to implement ebMS-based integrations that also support versioning.
Posted by Ronald van Luttikhuizen at 6:36 PM