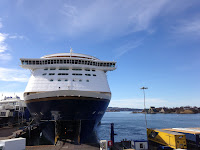 A big thanks to the conference and user group board who put together a well-organized and unique conference! Thanks for having us.
Posted by Ronald van Luttikhuizen at 6:02 PM